Under a blood-red sunset, figures are outlined, wearing dark clothes with patches of gilding against sun-kissed skin.

“For me, it was the sentiment of the South of France or Capri, where we had planned to show. It’s about the whole Mediterranean area: everything light and practical, with no grand gowns,” said Virginie Viard, Artistic Director of Chanel’s Fashion collections.

“But we did not shoot the picture on the Côte d’Azur – it’s the landscape of the Mediterranean, but the clothes were photographed in Paris,” explained Bruno Pavlovsky, Chanel’s President of Fashion Activities at Chanel and Chanel SAS.

Like the rest of the world, in lockdown during the pandemic, Chanel is mindful of the situation facing man and womankind and the anger and despair of people of colour, who feel abandoned, especially in America, but also far beyond its borders.

The executive is therefore taking a more sober attitude than “the show must go on” – even though the house is actively working on the current inter-season Cruise collection, with the intention to present it the same way online as it will with the July Haute Couture show.

“Chanel has a real posture and a true value – and that value of the brand is not consistent with what is happening at the moment, either in the United States or any country in the world,” Pavlovsky said.

Hoping to keep a delicate balance between a new collection and a new world order, Virginie took her original idea of Capri and defined the new show as a “balade” – meaning a stroll – around the Mediterranean coastline.

After the designer worked on the collection for just four weeks in May, the result is as light-hearted as the reality is complex. The images show soft tailoring, occasionally colourful, but mostly dark with patches of embroidery, glittering like a ray of sunlight. Or a tanned leg slithering out of a skirt.

How hard was it to produce this sensual serenity?

“We wore masks all day and covered our eyes and the women in the ateliers sat very spaced out – just one to each table,” Virginie explained. “We tried to keep the mannequins as if they were at home. And we really produced a minimal collection.

“We refreshed some outfits that were in the boutiques – two or three jackets that had been in a previous Croisière collection, which we changed by showing them with trousers. After all, when you go off on holiday, you take the clothes you know and love, yes?”

The designer explained that the main effect was in the way the clothes were shown in the Chanel images. She suggested “the idea of a little embroidered swimming top – I got that idea from a concert, where the singer was wearing a swimsuit covered with sparkles. And it is cute to have a little top and a matching handbag, re-using some of the treasures of (embroiderer) Lesage. That was one of my points of departure.”

It was not La Pausa, Mademoiselle Chanel’s South of France home near Monte Carlo, that had influenced Virginie – although I remember Karl Lagerfeld himself talking to me about being inspired by a curve of the staircase in that house.

“It could have been Monaco or Saint Tropez or Cannes,” Virginie explained. “I chose Capri because it is a dream of a place, but also because I had the idea of re-making an exhibition of Karl’s photographs.”

“I was so stressed at the beginning of the two-month lockdown – I couldn’t read; I thought about Chanel all the time; a lot about Karl and my family; about all the forces that have surrounded me; and I did quite a lot of cooking! It’s good to change your thoughts.”

Although the designer was eager to talk about the collection and its lightness – “a long cardigan, a jacket like a sponge, a white tweed, blazers in muslin and a bit of crochet” – she had stretched her mind beyond holiday dreams of a Mediterranean before the lockdown.

“I didn’t want the Cruise show to be the opposite of the current situation – not something too sad that is not the essence of Chanel,” she explained. “For me, Chanel is a treasure, a refuge that looks after you and does you good, like life itself.”

In a rare discussion with the Chanel group, which chose to promote Virginie, rather than searching for a new designer, Pavlovsky defined his view of where the current Artistic Director stands.

“There is a strong influence of Karl on Virginie, but at the same time she has had a lot of time to be able to understand the work done by Mademoiselle Chanel. Karl talked about that many times. So her view is slightly different from what we have seen in the past because she is bringing her contribution, which is probably something more feminine, something perhaps more in the ‘air du temps’ (the spirit of today). We have many comments from customers who see Virginie’s contribution to the design as very under Karl’s influence. For me it’s very consistent. And she has already contributed to bring her own vision of what Chanel is for the future.“

Hoping to return to actual, physical Chanel fashion shows in October, Pavlovsky has recently been concentrating on helping with the company’s varied international collections.

“I think that we have been doing a lot of things everywhere, in China and all over the world,” the executive said. “We feel quite involved. To support our community in such a situation, we have done lots in Italy and the United States has also been engaged.

“It was very important for the brand, beginning early in March, to start this amazing initiative, contributing masks, gowns and all this kind of thing. It was pure engagement or donation from people who are volunteers to participate. And this was quite important, because we have seen people from everywhere, starting with Haute Couture, making masks at home. They have all been distributed and at the end of the day we have made more than 700,000 face masks by our Métiers d’art and ready-to-wear workshops and from our suppliers.

“We need to reimagine our way of communicating, but we’ll continue to have shows. Shows are key when we are talking about fashion. It’s very difficult to explain a collection without shows. This time is the very first exercise, because I think it’s the first time in the past thirty years that we don’t have a show to express the collection. However, with all the photo shoots that we have been doing and that we are doing now, I hope that we will convey enough emotion for people to understand what we are doing with this collection.”

Pavlovsky summed up the attitude of the Chanel company in what I understand to be new branches on a tree with deep roots.

“You are a brand like Chanel and you want to emerge and keep the difference and bring something that brings value to the customers. You need to bring more than just a designer,” Pavlovsky said. “It’s a sprit, it’s a posture, it’s a way of looking at what’s happening around. I believed that with Karl, and now with Virginie, Chanel is doing that more than ever.

“I think that what is most important is to be able to link what we are doing tomorrow with what has been done in the past. We can have another perspective, but at the end of the day, there is the brand and with it the past, its code.” 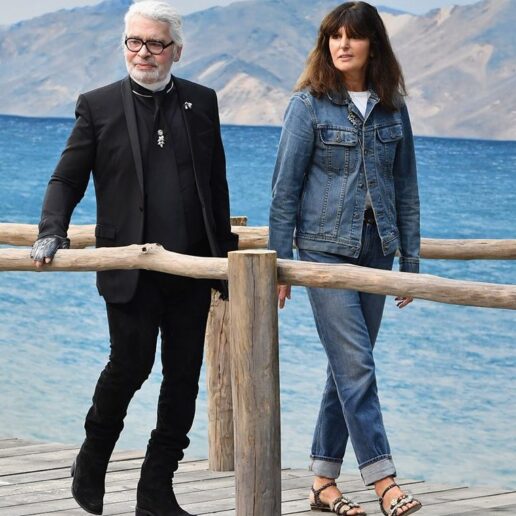 Remembering Karl Lagerfeld one year on