Canada’s Museum Magician Is Lauded In His Homeland

A holograph of Lady Macbeth wringing her bloodied hands. David Bowie strutting in a green tailored suit. Helmut Newton photographs capturing the sexuality of a female body on the quivering edge of decency.

The magnificently crazy world of fashion designer Thierry Mugler offers all that – and more – in an exhibition that has pulled in more than 100,000 visitors since it opened in March at the Montreal Museum of Fine Arts (MMFA).

But last week in Canada, the focus was elsewhere: Toronto, where curator Thierry-Maxime Loriot received the Vanguard Arts & Fashion Awards 2019 for cultural achievement. The Canadian former male model, who has morphed into a modernist museum curator, was awarded the honour for a decade of powerful fashion exhibitions. They started with “Jean Paul Gaultier: From the Sidewalk to the Catwalk”, which was ultimately seen by two million visitors around the world as it travelled to 12 different cities, from Melbourne to Berlin and San Francisco to Seoul between 2011 and 2016.https://www.instagram.com/p/ByOJL9tHcqE/?utm_source=ig_embedUnder the MMFA’s Director General, Nathalie Bondil, Thierry-Maxime has become renowned the world over as a museum magician. His exhibition successes have also included a study of photographer Peter Lindbergh, which premiered at the Kunsthal Rotterdam in 2016 and then toured to Turin (“Peter Lindbergh: A Different Vision on Fashion Photography”); and another Kunsthal Rotterdam show on Viktor & Rolf in 2018 (“Viktor & Rolf: Fashion Artists 25 Years”). The Dutch design duo Viktor Horsting and Rolf Snoeren showed their appreciation by attending the award ceremony in Toronto.

Now, Montreal has “Thierry Mugler: Couturissime”, at the MMFA until 8 September 2019. The exhibition spans forty years from 1973-2001 and is compelling in its mix of Space Age mannequins, never-before-seen visions of the original supermodels, and images contributed by a galaxy of 26 photographers, many of whom went on to become superstars, including Richard Avedon, Guy Bourdin, Sarah Moon, Paolo Roversi and Mario Testino.

“Montreal is not a city that is known for fashion, nor for these exhibitions, but it really has the tools to create grand, theatrical shows,” says Thierry-Maxime, 43. “It is like driving with Concorde behind you – you need to have a pilot and co-pilot and the crew that supports you and pushes you to create a success”.https://www.instagram.com/p/ByOPnoSHVmw/?utm_source=ig_embedManfred Thierry Mugler, as he now styles himself, is a designer who always leaned towards performance clothes and, in the new millennium, deliberately separated himself from fashion in favour of show costumes. While keeping the glamorama of fragrances such as “Angel” (from 1992) and later “Alien” with Groupe Clarins (from 2009, with a men’s version in 2018), he changed his body shape completely, making it difficult to connect him to photographs of him as a young designer who was a former ballet dancer.

“Fashion now is only sweatpants and Instagram,” Mugler said when I was in Paris last year to view the 150 pieces selected for the show from 9,000 in storage (see “Manfred Thierry Mugler: Back in Fashion”, 16 July 2018).

“Staging was important to me, but also the most important thing is to be inspired – by fish, insects, or a symbolic animal like a boar,” he continued. “Then there are objects – like a motorcycle or a car. The idea is to find the human in there and to transform all these inspirations, but also to simplify the feminine.”https://www.instagram.com/p/ByPpp1NH9XM/?utm_source=ig_embedTranslated into clothes, the effect is ultra-dramatic; a fashion play on illusion from that striking Lady Macbeth hologram, through super-vixens, futuristic femmes fatales, and curvy stage outfits worn by celebrities such as Céline Dion, Lady Gaga, Liza Minnelli and Diana Ross. Showing the designer’s lasting allure, most recently Cardi B appeared in vintage Mugler at the 2019 Grammys.https://www.instagram.com/p/ByPqNaTHlRV/?utm_source=ig_embedSome of the most lyrical creations, especially from the Nineties, are linked to nature, but playing a fashion game of contrasts. So there are apparently stiff, metallic clothes that contour the body; or a plunge into edgy nature with a scary “enchanted” wood buzzing with insects. Mugler’s profound belief was to separate living creatures from clothing. Decades before the current anti-animal fashion movement, he created fur-free fabrics, introducing similar effects with painted rubber or layers of airy plumes. Those feathers give a nature-in-the-wild feel to many of the outfits.

“For me this is McQueen before McQueen,” Thierry-Maxime says, looking at the focus on the world of animals. “Mugler, for me, invented the ‘new New Look’ – like Dior did,” he explains. “People always remember the big shoulder pads and small waists, but when you look at the exhibition, it’s not like this at all – it was only a tiny bit of what he was doing.”

Then there is Mugler’s tailoring, the boldly curvy suits with tiny bodies and waists, as worn by Ivana Trump, the former wife of the current American President. For a decade, she would buy a dozen pieces a season.

The award to Thierry-Maxime is proof that fashion exhibitions, so plentiful now across the world, can be genuine works of imagination and originality. Nathalie Bondil, MMFA’s Director General and Chief Curator – and the woman who found and encouraged her protégé – defines the exhibition as “metamorphoses, super-heroines and cyborgs already present in Mugler’s world”.

“Mugler perceived very early the trans-human revolutions on the way,” she says. “His streamlined and elegant creatures and dangerous, alluring women people a universe of glamour.”

How do Thierry-Maxime’s exhibitions differ from others? For example, the Gaultier exhibition had a display of millennial high-tech mannequins who “sang”, with pursed lips and eyes blinking in tune to the digitised music. In the exhibition, mirrors create an infinity army.

In the current Mugler show, the “Macbeth”, is a contemporary version of an Eighties summer performance by the Comédie-Française in Avignon, in south-eastern France. While in a more populist vein, there is also the body-conscious leather and fringe outfit from the video of George Michael’s “Too Funky”.

The other dramatic storyline concerns Thierry-Maxime himself. At 21 he moved to Montreal to study architecture, encouraged by parents who were lawyers.

“I come from a very academic family; my father has a PhD, both my parents are international lawyers, and my father was the head of the legal section of the United Nations Development Programme.”

He was not perhaps the expected young man to be spotted by a head-hunter for a modelling agency, and then immediately sent to Paris to the studio of a “Mister Test-o-nee”. He fell asleep with jet lag on the studio sofa, but the following day he found himself being escorted to London for a Mario Testino shoot with Kate Moss for Burberry.

“So within 48 hours let’s say my life completely shifted, from being a student in architecture to becoming a male model,” Thierry-Maxime says. “It was not the ideal story to have a son who would become a male model, but in the end, we know the story is not too bad.”

That is something of an understatement, not just because of the award, whose other recipients include Céline Dion in 2018, among other Canadian luminaries of the creative industries.

The curator’s attendance figures for all his work have been stellar and this is why: his concept is to present the designer as a three-dimensional subject. The effect is of recreating the magic of a different era, but making it seem actual, modern and relevant – the opposite of a typical museum show that captures the past and presents it frozen in time.

Thierry-Maxime admits that his exhibitions are not easy – to create, or to manoeuvre. “The Gaultier exhibition was quite audacious at the start – to do this type of exhibition and to travel it – because it was very heavy,” he says. “We had 13 tonnes of material, so it was like a rock concert. In terms of photographs, it was very dynamic but also complex to install.”

Yet he is doing something right – three museums have already signed up to run the Mugler exhibition. Its first stop after Canada will be at the Kunsthal Rotterdam. 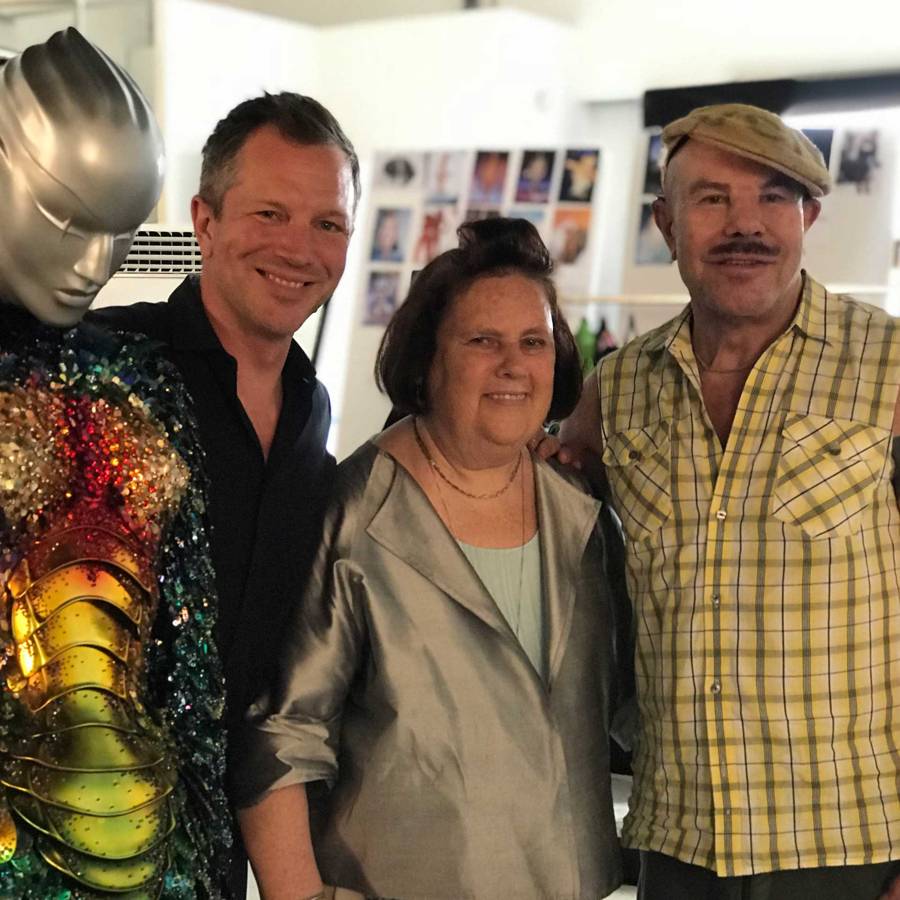 So what is Thierry-Maxime doing now? Looking after his garden at the Montreal home he shares with his long-term partner. “I love gardening. I love flowers. I’ve been planting peonies, ranunculus and roses – I only like old flowers – and I love those big English gardens with hydrangeas. I love to make bouquets in my garden.” “Thierry Mugler: Couturissime” is at the Montreal Museum of Fine Arts until (8 September 2019; www.mbam.qc.ca)